Yesterday, the Cook Political Report released the 20th Anniversary Edition of the Partisan Voter Index (PVI). First published in 1997, the Cook PVI rates the degree to which a congressional district leans Republican or Democrat by comparing the district's performance in presidential elections to the nation as a whole. The Cook PVI tracks the partisan ratings of all 435 congressional districts and all 50 states. For more than two decades, the PVI has helped map the trends of our country’s shifting political landscape. The release of the 2017 PVI ratings reveal powerful insights into the post-Trump electorate.

The number of congressional swing districts has reached a 20-year low.

A swing district, according to Cook, is defined by a PVI rating ranging from D+5 to R+5. Following the 2012 presidential election, there were 90 swing districts. Four years later, there are 72 … 9 districts now lean more Democratic and 9 districts lean more Republican. This 18 district drop is only a fraction of the 56% decline in swing districts over the past 20 years from 164 in 1996 to 72 in 2016. 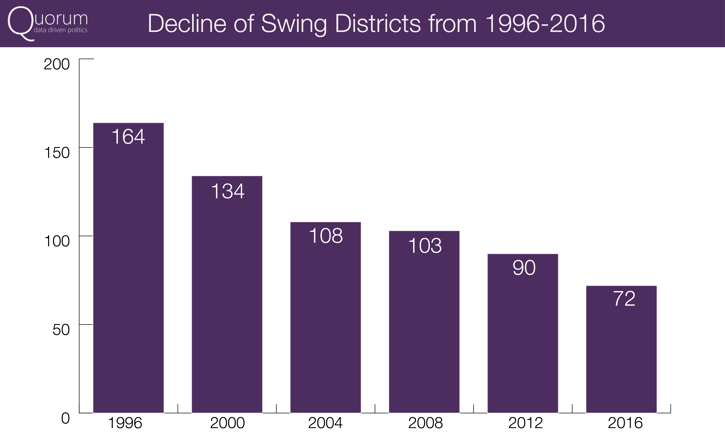 Rep. Peterson (MN-07), Nolan (MN-08), Cartwright (PA-17), and Kind (WI-03) all serve in districts that have shifted 5-6 points to the right since 2012. Rep. Peterson’s district has doubled its R+ rating, Rep. Nolan and Rep. Cartwright’s districts have flipped from Democrat to Republican, and Rep. Kind’s district has dropped from D+5 to EVEN. Among these four at-risk Democrats, Rep. Peterson most frequently votes across party lines -- voting with his party only 74% of the time. All members except Rep. Cartwright have served in the House for more than 20 years. 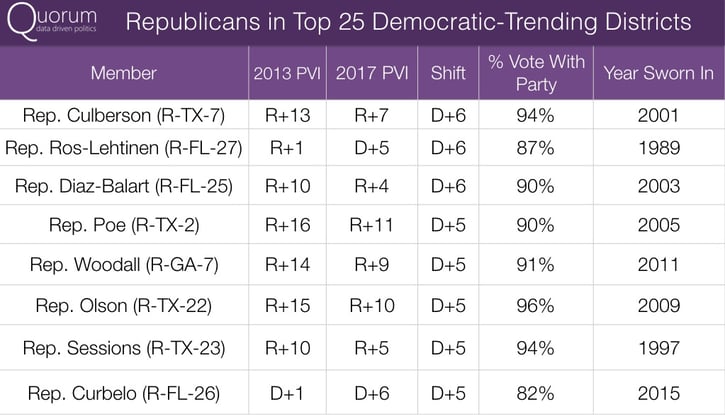 The 2017 PVI ratings reveal an increasingly polarized country. With the upcoming April town halls and the 2018 elections fast approaching, the PVI will serve as a valuable tool for identifying areas of vulnerability and, for some, opportunity. Congratulations to the entire team at the Cook Political Report for another insightful edition of the Partisan Voter Index.

Most Vocal Mayors on Issues Facing Cities in 2018