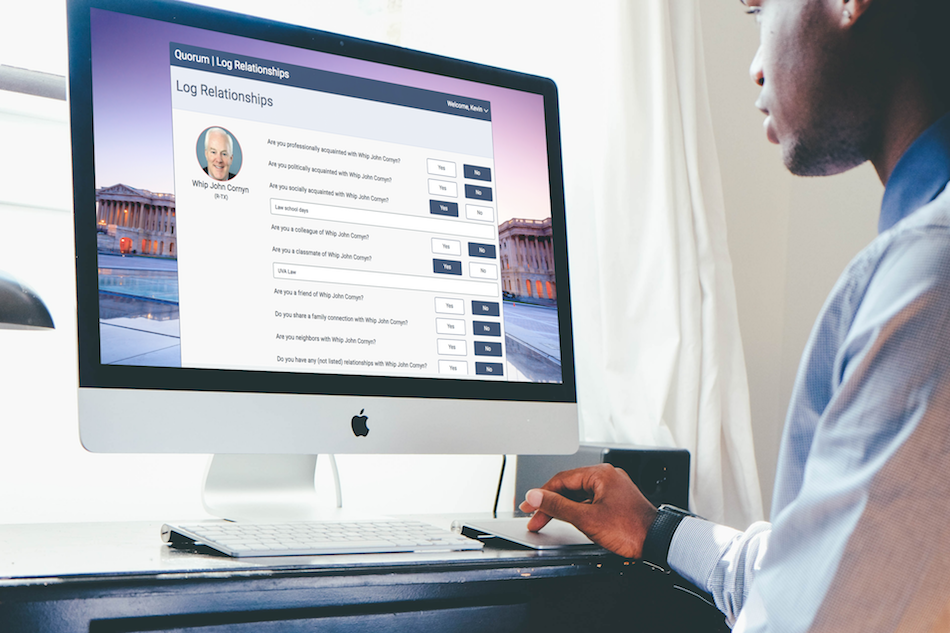 The goal of this exercise is to see who may already have their foot in the door with a certain member of Congress and to make it easier to proceed through the process of building support on an issue. Did someone in your network go to the same university as a member of Congress? Do they have a family connection? Did they volunteer on their campaign?

The long term success of an ambassador program depends on the volunteers’ commitment to build and participate in the relationship with your champion legislators. Persistence is key to success as you want your ambassador to be memorable to the legislator.

Create Structure in Your Program

Steps for the ambassador program should be clear. Rather than just assigning ambassadors a legislator that they must build a relationship with, give steps that will provide a means to growing the relationship.

Have Ambassadors Reach Out for an Intro Meeting

Have your ambassador schedule a meeting with the member in their district office to familiarize the member with the ambassador. This should be a getting-to-know-you opportunity, not focused heavily on the issue you are advocating.

By attending an event hosted by the target legislator, the ambassador can have a chance to meet and interact with the elected official in a more social setting and, potentially, for a longer period of time than the initial sit down meeting. An example could be donating and attending a fundraiser for the official.

Schedule a Site-Visit for the Member

Next, the ambassador should coordinate a site tour for the member of Congress of a facility in the district that exemplifies the work the organization is doing. This could be a factory, a store, a clinic, an educational facility— anything that provides a hands-on example of the work your organization is doing in their district.

Bring the Ambassadors to Washington

You’ve had the member of Congress come to you, now you need to go to the member of Congress. This can be part of a coordinated fly-in or as a smaller task for individual ambassadors, but the key is to show the legislator a willingness to meet in their space and listen to their thoughts. A tip—provide matching t-shirts for your ambassadors so as they walk around Capitol Hill, members and staffers walking the halls can recognize your organization and the volume of people who care about your issues.

Your ambassadors have cultivated a relationship with their respective legislator, so the next step is to have them make a small ask of that official. This could be something along the lines of asking them to cosponsor a resolution. For example, if your end goal is more funding for sciences, ask them to sign on to a resolution for “National Science Day”. By asking for this smaller task, you can learn about the office dynamics and which staffer can help you get things moving for bigger policy issues.

Now that you have target legislators that have built a strong foundation for your advocacy, the ambassadors should continue to find ways to interact with their legislator. Continue to attend events, keep the legislator updated with progress your organization has made, and visit them when the time allows.

While an ambassador program on its own isn’t enough to get legislation passed, it can be a valuable way to work in tandem with future plans for wider grassroots advocacy. When the time is right and a legislator is ready to make a significant legislative move on your issue, your ambassadors will be your first point of contact to make sure your organization is represented.